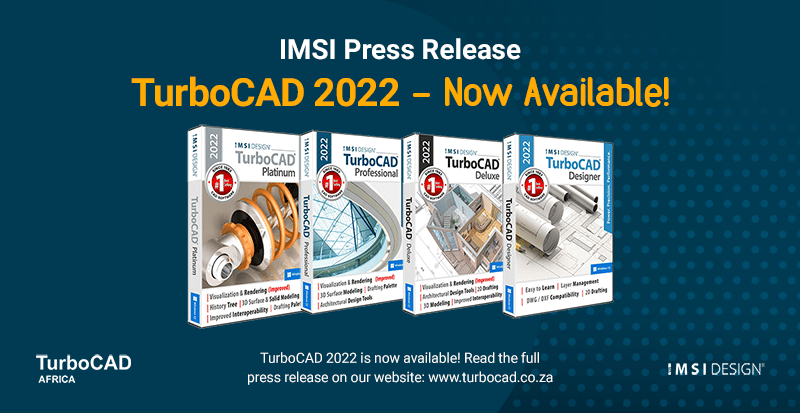 The TurboCAD 2022 release is highlighted by the inclusion of a new Physical-Based Rendering (PBR) engine, TurboLux™, included in all of the 2D/3D versions of the product line.   includes over twenty new and improved features.  “The release of TurboCAD 2022 has a strong focus on Visualization, 3D Modeling and Architectural enhancements, as well as integration with our new in-app Content Server that contains 100,000’s of parts to speed-up design,” stated Bob Mayer, President of IMSI Design.“

“We are excited to announce the release of TurboLux, a first of its kind Physical-Based Rendering engine now available in TurboCAD Deluxe, Professional and Platinum versions. The TuboLux rendering engine addition has taken TurboCAD’s visualization capabilities to a whole new level of photo realism.  Both CPU and GPU rendering are incredibly fast, there’s hundred of additional materials, and when coupled with the other 2D drawing, 3D modeling and interoperability enhancements, we know all of of TurboCAD users will find 2022 a grat new release,”  added Mayer.

TurboCAD® 2022 Deluxe is the essential 2D Drafting and 3D Modeling solution for individuals, small businesses, students and educators. This software continues to be the best solution on the market for new 2D/3D CAD users and incredible collection of 2D drafting, 3D surface modeling, photorealistic rendering, and support for popular 3D printing and file formats.

TurboCAD® 2022 Designer is the essential 2D Drafting solution for new users of CAD. t’s easy-to-use precision 2D CAD software at an entry-level price. Use the setup wizard, tutorials, and context-sensitive help to immediately get productive. Quickly draw, modify, dimension and annotate floorpans, technical illustrations, and any other 2D design you can think of.

Key New and Improved features include: